I used to watch Pride every year when I lived in The City, I’m more retiring these days, but my heart is always there, as are many of my very dear ones, friends and family alike.

Licca & Billy in The Parade & Proud! 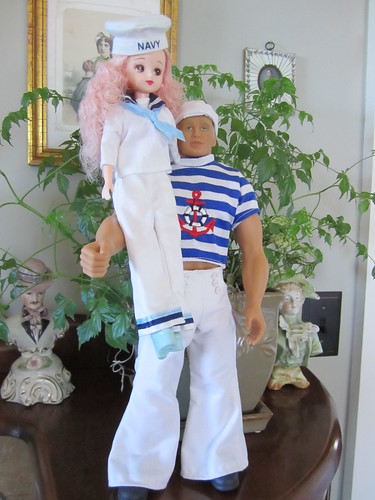 Licca & Billy in The Parade & Proud! 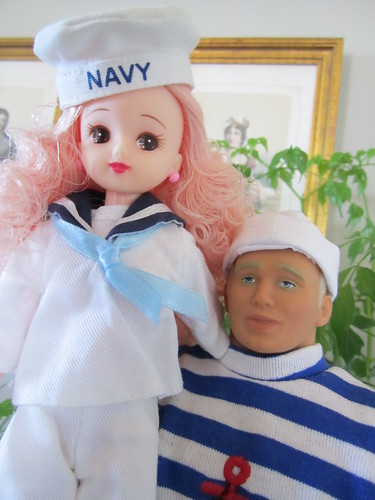 I’ve also been collecting porcelain dandy figurines. I love porcelain, but most of it, the good stuff, is so far beyond my reach.  So I’m targeting mid-century-regency twee pieces, and they can be had for a steal. I look for good color, and the faces must be well painted. And anything “made in japan” is fair game!  I love the dandies, some of them are so poncy that the sellers on eBay often mistake them for women, such as my Mint Bicorne figure below.

Pretty Porcelain: I love my boys 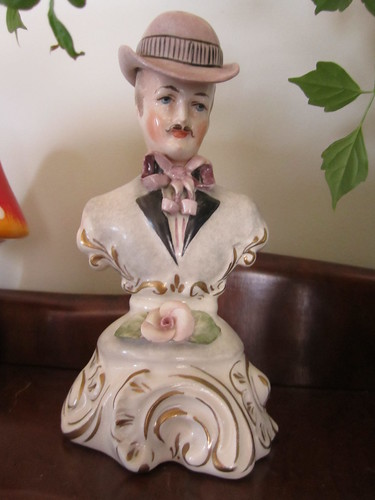 Lilac Derby is by Cordoy, and the Minty Green Bicorne is "Made in Japan"

Pretty Porcelain: I love my boys 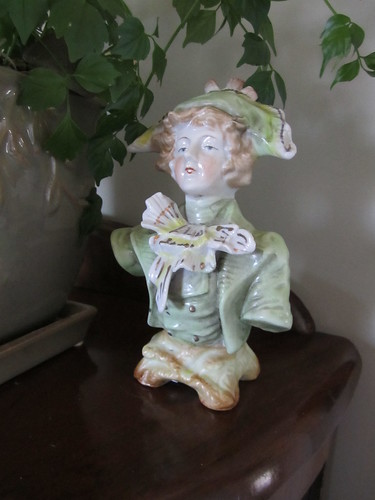 Lilac Derby is by Cordoy, and the Minty Green Bicorne is "Made in Japan"

Point de Convention (Absolutely no agreement)
Louis-Léopold Boilly 1797
A Merveilleuse is mistaken for a prostitute
and refuses the coin offered to her.

The Muscadins (or Incroyable, the Incredible) first appeared around 1792, known for their royalist sympathies and so named for the musk perfume they wore in defiance of revolutionary austerity. They re-emerged after the fall of Robespierre, ending the Terror, and were key thugs in what has become known as The White Terror, a backlash against jacobin oppression, violence, and Robespierrean virtue. The jeunesse dorée roamed the streets of Paris drinking, toasting the monarchy and lashing out at patriots with sticks. And they looked fabulous doing it. Typified by their adherence to ancien regime knee-breeches and exaggerated English style frock coats with impossibly large collars, and powdered hair dressed outlandishly in either multiple braids or “dog-eared” style, cut short in the back à la victime and long beside the face. They were literally roving bands of angry dandies. By the late 1790’s however, sporting a Muscadin hairdo would no longer get you arrested (as it could in 1795) as the various styles were adopted and absorbed into the fashionable and ephemeral society of the Directoire.
Aileen Ribeiro says of this image (les Incroyables) :

Caricaturists found a perfect subject in the form of the masculine fashions of the late 1790s. Both young men wear tight-fitting square-cut coats with huge lapels, and knee-breeches decorated with loops of fabric. Their political sympathies are not necessarily clear. Although their culottes date from the ancien régime, their printed cravats are working-class in origin; and, while the man on the left wears his hair plaited at the back à la victime, the man on the right has a revolutionary cockade prominently pinned to his hat. Both have shaggy hair, the side locks falling like spaniel’s ears. The implications seems to be that fashion is more important than ideology.
— Fashion in the French Revolution, Aileen Ribeiro

Les Merveilleuses, or Marvelous Women, ruled the live fast, die young social whirlwind that took over the salons of Paris after the Terror. At their front Thérésa Cabarrus Fontenay Tallien and Joséphine de Beauharnais (later Empress) both of whom just barely survived the Jacobin regime. It was partly on Thérésa’s behalf, with whom Tallien had been conducting a torrid affair, that he spearheaded the Thermadorian take down of Robespierre and the Montagnards. The à la Grecque style typified by Thérésa, Joséphine, and Madame Récamier consisted of clinging, flowing classical Greek and Roman styles in white silks and muslins, draped with brightly colored shawls and ribbons edged with classical motifs. The once allegorical fashion left the painters studio and took to the streets and ballrooms, their dainty feet shod in golden sandals, and dresses dampened to enhance their cling (though wearing knitted flesh colored stays and stockings to preserve a vestige of modesty). Madame Tallien though was the real deal, and famously appeared at the Paris Opera wearing a white silk dress without sleeves and sans petticoats (gasp!). Charles Maurice de Talleyrand commented: “Il n’est pas possible de s’exposer plus somptueusement!” (“It is not possible to exhibit oneself more sumptuously!”) [source: wikipedia]. Hair was worn curled and dressed with ribbons à la grecque or clipped short à la victime or à la titus, in emulation of the last haircut the condemned received before being sent to the guillotine so as not to impede the blade. This short and sassy style lasted amazingly til the early 1800s, but never caught on in England or other countries, unlike the empire waisted dress, which proved the silhouette du jour for nearly thirty years.