Ashcroft to be replaced by….
Mini Ashcroft!

Gonzales has been at the center of developing Bush’s positions on balancing civil liberties with waging the war on terrorism — opening the White House counsel to the same line of criticism that has dogged Ashcroft.
For instance, Gonzales publicly defended the administration’s policy — essentially repudiated by the Supreme Court and now being fought out in the lower courts — of detaining certain terrorism suspects for extended periods without access to lawyers or courts.
He also wrote a controversial February 2002 memo in which Bush claimed the right to waive anti-torture law and international treaties providing protections to prisoners of war. That position drew fire from human rights groups, which said it helped led to the type of abuses uncovered in the Abu Ghraib prison scandal.
Some conservatives also have quietly questioned Gonzales’ credentials on core social issues. And he once was a partner in a Houston law firm which represented the scandal-ridden energy giant Enron.
Gonzales would be the first Hispanic attorney general.

Please Sir, how about someone who believes in human rights and isn’t tied to corporate scandal? Is that too much to ask? At least he won’t throw sheets over the boobs of justice.
BOOBS OF JUSTICE!!!
Or will he? 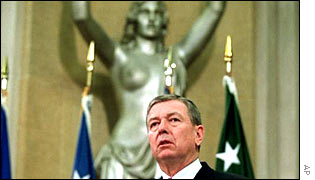 One thought on “Oh boy.”