stolen from Mara, I had to respond to the thread on DOA “Do you make assumptions about owners based on their dolls?” as well:

My dolls dress like I used too.
I’m old and rounder now, but have always been expressive. I still run around in the house in tutus on the weekend though. I’m 36, by the way.
And wear bunny ears inappropriately.
I was too old for the Gothic Lolita scene but I SO LOVE IT, and completely live vicariously through my girls.
I’ve had fuschia hair. And bloo. And cherry red. But mostly I’m a carrot top.
And I do dress up in Edwardian lace.
And big boots and petticoats. I have a green tutu covered in giant daisies.
But some of the stuff I never would have worn because it was not cool to buy ready-made punky-punk clothes BACK IN THE DAY. Hehee. So I love spoiling my dolls with them.
My first concert I wore a piece of black fabric safety pinned on the side because they didn’t make black mini-skirts in 1982. I think it barely covered my tush. I was fourteen.
My dolls are absolute expressions of who I am.
This could easily be a picture of Fifi. Halloween 2001 in New Orleans: 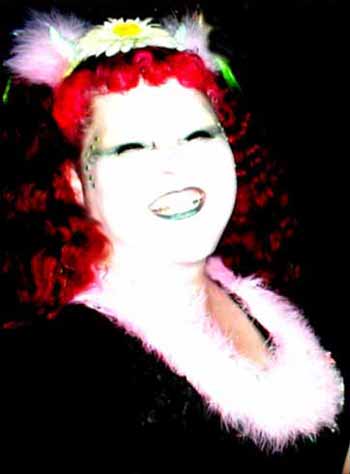