It wouldn’t be holiday without a Craigslist run.

@Organtitus is disassembling it to get through the kitchen doorway. Or we would have to bring it up the big front stairs. It is a big baby! 48″ wide x 32″ tall x 30″ deep. Luckily he didn’t know it wouldn’t fit through the kitchen door before we brought it home. But it is through now and he is reassembling it. It is big enough to fit a super dollfie sized room! Something had to go though. Bye bye antique trunk, I traded you for something see-thru.

You guys! I got the most awesome curtains ever for the Rumpus Room (tv room/library) last night! Honest, I went in for some nice dark teal blue cotton curtains AND CAME OUT WITH FIESTA COLORED PARROTS!!! So. The room is going crazy pop art Madonna Inn Enchanged Tiki Room. That’s a thing, ain’t it?

Check out the pin board where my evil plans are slowly being realized.

Now I want to bring it down a notch with a big teal/turquoise over-dyed peacock green rug.

The walls are light green.. which will really make all the ikea lampshades I got POP!

And this is just me dreamin’ but I really am dying for this chair. Cuz, HELLO.

Celebration for Taxes Well Done! That’s my excuse any way. I just can’t believe how awesome these are.

In case you were wondering, wee plastic toys are still winging their way here from Japan, Hong Kong, Taiwan via Rudi and others. Occasionally. If they’re pirate themed.

Musing as I’m watching another pair of period drama trailers: do I need to write a dissertation on why female rulers must always choose between their “heart” and their country? While their codpiece bedecked brethren are assumed to be in control of both (Ok, ok, so Henry ran into a spot of bother on this one, but if he/she’d just been willing to SETTLE, etc, etc)? Rings familiar to the Career VS Family we’re all supposed to be struggling with. My curiosity is more on the “how much is literary/cultural construct” VS reality.

Note: I have seen neither of these yet! Will remedy that STAT.

Ooooh, I’m going to study up. Guilty on all counts!

(ok, now where’s that “I don’t give a cup of fuck.” meme? I know I laid it around here somewhere, but with all those cluttered tabletops and bad lighting locations, I can’t find it!)

A couple years ago I begged Paul Kaiju (http://www.paulkaiju.com) to do his magic on a dollfie dream body so I could have a Devil Girl in vinyl along the lines of his Yooskie. I’d had my heart set on a Delf Winking Ari head JUST as Luts discontinued her. Wah! But then… THEN… Nofunangie was selling her Winking Ari “Tankgirl” on the promise that she would be totally wiped and live no more. Mr. Kallisti did so, and sculpted some devil girl pointy ears on the head, while I bought my Brother in Law’s Dollfie Dream 1st Edition body (optimum for the doll anus in the sculpt. I know, I’m funny that way).  We inset magnets into her forehead, Mr. Kallisti did quick horns. There will be more.

Face-up by me. I promise to take more pictures of her, Evelina is RAD!

More pictures of our Holiday palace at Casa de Crockett! 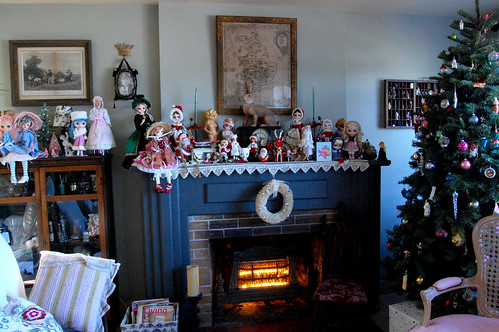 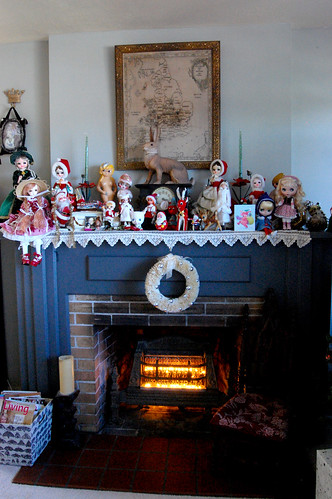 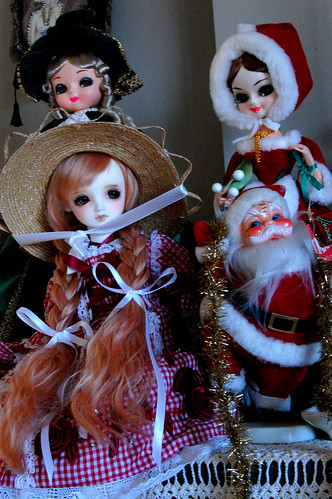 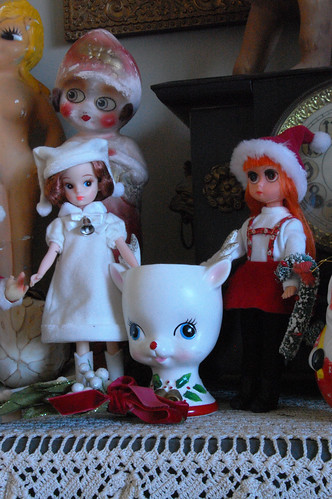 Fester & Butter pose… can you tell I have a piece of chicken in my hand? Works for dogs. Not so much for cats.

Whose eyes are buggier? The frog or the chihuahua?

Biscuit, not so much. His opinion is pretty clear!